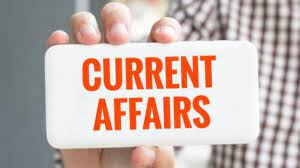 The new Facilitation Centre will work as a one-stop-centre for the exporters in the agricultural sector as well as boost agricultural exports from the region, as per global standards.

Nearly 64,000 Tibetans living in exile in India, Nepal, North America, Europe, Australia and elsewhere voted in the election, which was held in two rounds in January and April.

Ouane will have to form a new government with room for the political class, under the instructions of President Bah N’Daw.

4- Atlas V rocket launches SBIRS Geo-5 missile warning satellite for US Space Force– The United Launch Alliance launched the Atlas V rocket from Cape Canaveral Space Force Station, Florida.
The Atlas V rocket carried SBRIS Geo-5 Missile Warning Satellite. The full form of SBRIS is the Space-Based Infrared System. It is designed for missile warning, missile battlespace and defence characterization.
5- Medicine from the sky’ pilot at Vikarabad area hospital –  The Telangana government has selected 16 primary healthcare centres (PHCs) spread around Vikarabad area hospital for pilot testing the ambitious ‘Medicine from the sky’, the first-of-its-kind project involving delivery of medicines through multiple drones.
The area hospital has been selected as the central point owing to the presence of cold chain facilities and the selected PHCs are both within the Visual Line of Sight (VLOS) and Beyond Visual Line of Sight (BVLOS) range.
A consortium of seven operators headed by Blue Dart Med-Express had been selected for the project to be launched in the VLOS range of 500 metres initially and will be scaled up gradually to a 9 km range.
The project would be launched in three waves starting with a pilot followed by mapping the route network for the operation of drones for delivering vaccine/medicine in the desired community health centres and PHCs.
The project is being launched following the approval granted by the Civil Aviation Ministry to the request made by the State to grant conditional exemption from the Unmanned Aircraft System Rules 2021 for conducting experimental BVLOS drone flights for delivery of vaccines.
6- India’s WPI Inflation Surges To 10.49% For April 2021– The Department for Promotion of Industry and Internal Trade recently released Wholesale Price in India for the month of April 2021. The annual rate of inflation for the month of April 2021 was 10.49%.
The WPI for the month of April 2021 stood at 128.1. The base year in calculating WPI is fixed as 2011-12.
The WPI Food index consists of food products from the manufactured products group and food articles from the primary articles group. The WPI Food Index increased from 153.4 in March 2021 to 158.9 in April 2021. The increase rate in April is 7.58% and that of March is 5.28%.
7- India-Microsoft MoU on Digital Transformation of Tribal Schools– The Ministry of Tribal Affairs and Microsoft signed a Memorandum of Understanding on the joint initiative for Digital Transformation of Tribal Schools.
This includes the introduction of Ashram Schools and Eklavya Model Residential Schools (EMRS) in tribal areas.
Microsoft will make an Artificial Intelligence curriculum available for the tribal students in Hindi and English.
In the first phase of the programme, 250 EMRS are to be established. Out of these 250 schools, 50 schools will be given intensive training. And five hundred master trainers will be trained in the first phase.
The teachers are to be trained in a phased manner to use Artificial Intelligence application and production technologies such as Office 365. This will introduce the teachers to the world of collaboration and help them understand how teaching shall be increased with virtual field trips.
The teachers will also be provided with E-Certificates and E-badges from the Microsoft Education centres at the end of the programme.
8- Iran Develops Its Most Powerful Supercomputer “Simorgh”- Iran has unveiled a new supercomputer named ‘Simorgh’, which is 100 times more powerful than the previous supercomputer of the country to date.
The supercomputer has been developed indigenously by Tehran’s Amirkabir University of Technology (AUT). It has been named after a mythical Phoenix-like bird ‘Simurgh’.
Currently, Simorgh has a performance capacity of 0.56 petaflops
9- Arjan Bhullar becomes first Indian-origin fighter to win MMA title– Arjan Bhullar became the first Indian-origin fighter to win a world title in a top-level MMA promotion when he beat Brandon Vera to become the heavyweight world champion at the Singapore-based One Championship.
10- Former President of Indian Medical Association Dr. KK Aggarwal Passes Away– Renowned cardiologist and former national president of the Indian Medical Association (IMA), Dr KK Aggarwal, has passed away battling with Covid.
He was an eminent physician and cardiologist, who also has served as the head of the Heart Care Foundation of India.
—————————————————————————————————————————–
Check Latest Update on Sarkari Naukri daily  – Click Here